The Tigers traveled to Afton on Friday night to take on District foe East Union. The Eagles came into the contest on a two game win streak, and boasted an offense that was averaging 52 points over that two game stretch. On the opposite side the Tigers Defense hadn’t allowed a point in their last two games making it a matchup full of anticipation.
The Tigers jumped out to a commanding start to the game scoring on five possessions in the first half. Quarterback Cullen Wood had his biggest game of the season passing. Wood was 5-9 for 175 yards and three touchdowns. Four different Tigers were on the receiving end of Wood’s passes. Colton Gordon caught two passes for 64 yards and two touchdowns, Brad Larson had one catch for 45 yards and a score, Keegan Christensen had a catch for 25 yards, and Isaac Grundman had a screen reception that went for 41 yards on his only catch as well.
Just when you may have thought Coach Nardini was going to the air he put the rock right back into his two headed monster’s hands in the backfield. Gordon and fellow Senior Drew Ventiecher ran all over the Eagle Defense. Gordon ran the ball 26 times for four touchdowns and 142 yards rushing, and Ventiecher got the call 14 times in which he pounded the ground for 154 yards to lead all rushers on the evening. Ventiecher found paydirt twice including a 70 yard score in the first half.
On Defense it was business as usual for Coach Bonde’s guys who held East Union to 22 points, and held them scoreless in the first half. It was a tough Linebacker corp made up of Venticher who had nine total tackles and two solo tackles for loss, Jonathon Weaver who chipped in seven total tackles, and Gordon who also chipped in four solos and as many assists to help lead the Tiger Defense to a 68-22 ‘W’.
In the turnover battles it was the Tigers winning with an interception from Sophomore Defensive-back Conner Fitzgerald, and a fumble recovery from Weaver.
The Tiger Defense is allowing just an average of 16 points per game to their opponents, and the Tiger offensive attack is averaging a staggering 64 points per game to put them among the state’s leaders in both categorizes.
The Tiger’s return home this week to take on Mormon Trail (0-3) in the Lenox Homecoming game.
Last year this game had a combined score of nearly 170 points so get your popcorn ready. Tiger Pride. 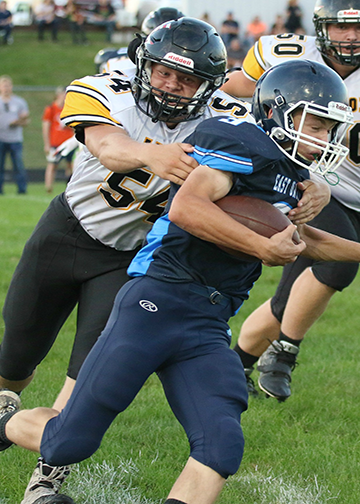 Coleman Dukes chases down the East Union running back behind the line of scrimmage early in the first quarter. (photo by Meg Barker) 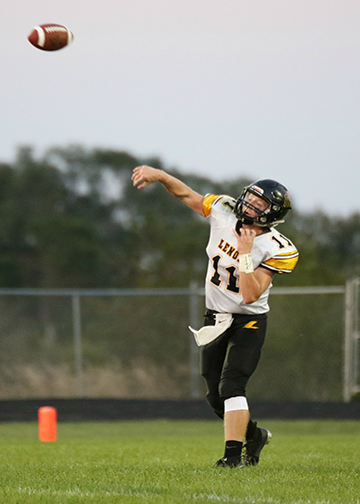 The Tigers’ second touchdown against East Union came on this Cullen Wood pass to Brad Larson. (photo by Meg Barker) 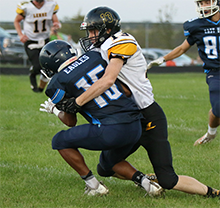 Johnathan Weaver with a solo tackle in the first quarter of the Tigers’ win at East Union. (photo by Meg Barker)