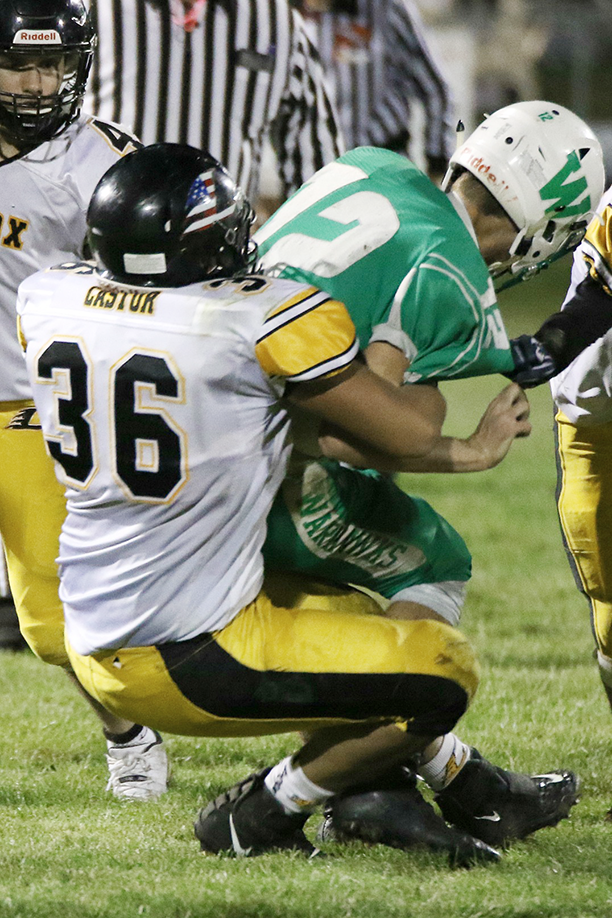 Hernan Castor was the Tigers’ 2nd-leading tackler against Southeast Warren with 7 (4 solo).(photo by Meg Barker) 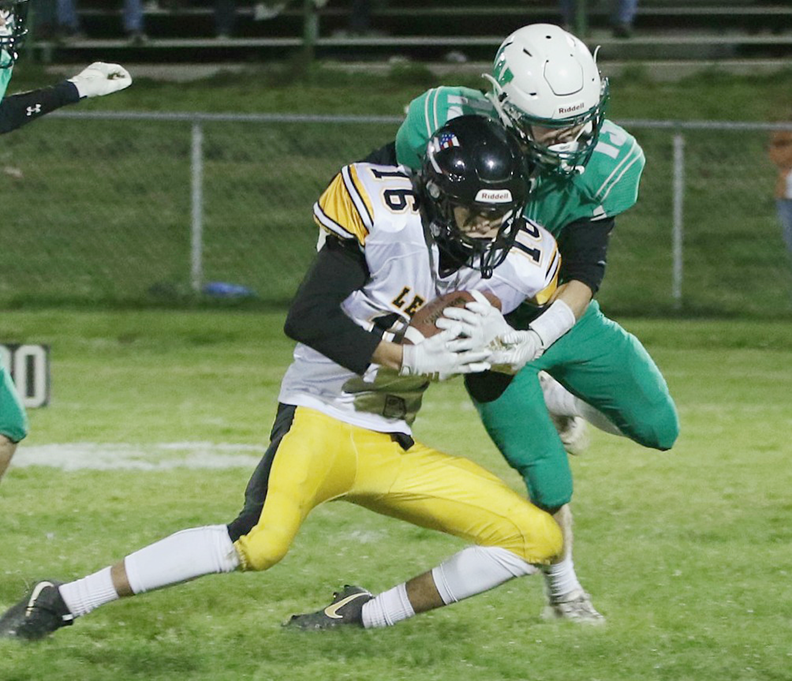 Brad Larson makes the catch in the final minute of the first half at Southeast Warren.(photo by Meg Barker)The Tigers traveled to Lacona, Iowa in a much anticipated matchup against the Southeast Warren (SEW) Warhawks on Friday night under the lights, and it was a slow start and turnovers that prevent the Tigers from getting much going offensively in a 8-28 loss.
This is the first loss of the season for the state rated #6 Tigers that will likely drop them from the rankings. SEW had two losses earlier this year, but both were in non-district play, and now by upsetting the Tigers are the front-runner to win the district along side Lamoni who is also undefeated in district play. If the Tigers win out their chances of still making the playoffs, and depending on what happens with Lamoni and SEW potentially still being crowned district champions.
“We just couldn’t seem to get much going.’ ‘Hats off to them for a strong game plan.” Stated Assistant Coach Seth Willets on Friday night. To you all you Tiger faithful out there don’t be too disappointed in this loss.
If you remember right in 2008 the Tigers lost early in the season, and used that wake up call to run the table and become state champions! There is the potential that this team we have this year could do just that. Senior Colton Gordon was the offensive leader in the Tiger running attack with 26 carries and 103 yards. Drew Ventiecher ran hard downhill from his fullback position, and collected 42 yards on 11 carries, and quarterback Cullen Wood had his best game as a rusher with 48 yards. Through the air Wood was 3-9 passing on the evening.
Brad Larson was the leader in receptions and yards with two for 69 yards. Defensively Ventiecher had his biggest outing of the season flying all over the field to collect nine solo tackles, and tack on an additional ten assists including four tackles for loss.
Sophomores Hernan Castor and Jonathon Weaver did their best as well to contain the Warhawk attack with seven tackles each, and also combined for four tackles for loss.
The Tigers now return home to “The Jungle” Friday evening in their final regular season home game against Murray (1-4). Still so much to play for! Tiger Pride!