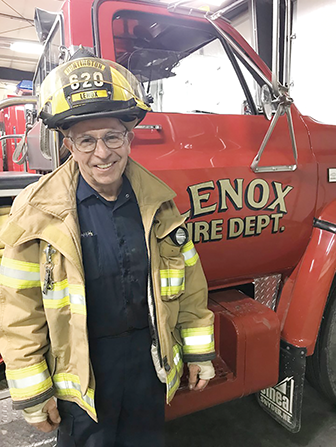 Reldon Huntington closed out the 2019 year by hanging up his hat as an active Lenox fireman after serving the fire department for more than 40 years.
Reldon joined the department in 1974. At that time, the department had about 20 firemen and the fire station was located where Dr. Sawyer’s office was in later years.
The city bought the building that housed Allis Chalmers from Ernie Hufnagel and moved the fire department to it. That building later became city hall. At that time, the fire department consisted of a 1949 Chevy and a 1966 International with water tanks.
“I think the International had 1,000 gallon tank and the old Chevy had 500 gallon tank maybe,” said Reldon.
Reldon remembered Doc Bubb had a wrecker and it had a push bumper on the front. “Doc was a member of the fire department for years and years and that old ’49 Chevy had a six cylinder engine in it. When they went to fires, Doc would push that old ’49 Chevy to fires with the wrecker,” said Reldon. “It was crazy back then.”