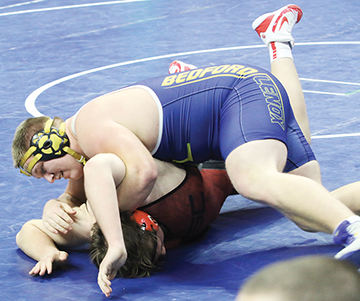 Devin Whipple is rolling his opponent over from East Sac County to get him in the pin position in his first match at state. Devin won by pin in that match. (Photo courtesy of Iowa Newspaper Association).

Junior Devin Whipple represented the Bedford/Lenox wrestling squad at Wells Fargo in Des Moines last week. The tournament may not have turned out the way Whipple anticipated, but he wrestled hard and should be proud to have made it back to state wrestling.
In his opening match against Justin Rupnow of East Sac County, Whipple used an escape and a take down to take a 3-0 lead in the second period. He was then able to get his opponent on his back for a pin at the 2:34 mark.
In his next match with Brent Baltes of Lisbon an escape and a take down in the second period for Baltes was all the scoring in a 3-0 final that dropped Whipple to the consolations. Baltes ended up finishing third on the podium.
In Whipple’s first match in the consolation bracket he faced off with Mathew Kauffman of Pleasntville. The match went back and forth with Whipple holding a 2-0 lead at the end of the first period when he scored a takedown 58 seconds into the match. The second period saw a lot of action, as an escape and a takedown pushed Whipple’s lead to 5-0. A penalty for grabbing the head gear and an escape for Kauffman made it 5-2 before Whipple scored another takedown making it 7-2. A flurry in the finals seconds by Kauffman tied the score at 7 with the help of a reversal and a near fall to send the match to the third period. Fifteen seconds into the third, Whipple found himself on the wrong end as he was pinned, ending his tournament. Kauffman ended up with a 6th place tournament finish.
Whipple ends his junior year with a 46-6 record. Congratulations on a great season.