Ron Rogers, 77
Funeral Celebration of Life Services for Ron Rogers, age 77, of Creston, formerly of Lenox, who passed away Friday, May 28, 2021 in Des Moines, Iowa was held Wednesday, June 2, 2021 at 10:30 AM at the First Baptist Church in Creston. Visitation was at the church on Tuesday, from 3:00 PM to 7:00 PM with the family greeting friends from 5 to 7. Interment was held at 1:00 PM at the North Fairview Cemetery in Lenox. Memorials may be directed to his church. Memories may be shared with the family at www.ritchiefuneralhome.com under Obituaries. Arrangements were entrusted to the Ritchie Funeral Home of Bedford where we ‘Celebrate Life’.
Ronald Dean Rogers was born on June 23, 1943, at Jennie Edmundson Hospital in Council Bluffs, IA, to Gerald Harley and Francis Genevieve (Riley) Rogers, the second of three children. He attended school at Mercer No. 5 through eighth grade and graduated from Lenox High School in 1961. In August of 1961, Ron met Janice Frame, and the two were married on June 22, 1963. Ron and Janice were very active in the Salem Church of the Brethren for many years. Ron served as a deacon, led the church in song, and performed many other duties until the church closed. The couple could be found on many vacations traveling and exploring God’s beautiful creation on their motorcycle. Ron had a passion for farming at a young age. He helped on the family farm as he grew up and began full-time after graduating from high school. Ron briefly attended college at AIB College of Business in Des Moines, IA, but soon realized that farming was his true passion. In 1976, Ron started his tiling and excavating business, Rogers Construction, building relationships and working on farms across the area. Ron sold his business to his daughter and son-in-law, Rachelle and Chuck Van Gelder, in 2011, but could still be found in the fields every day he was able. He went to be with his Lord and Savior at the age of 77 years, 11 months, and 5 days on May 28, 2021, at Mercy One Hospital in Des Moines, IA, following complications from a heart attack.
Ron loved his Lord and Savior and the people of First Baptist Church in Creston. He and Janice joined their church’s fellowship group and happily hosted youth group gatherings in their own home. He enjoyed spending time with family and friends, sharing his love of music, and telling others about his faith in Jesus Christ. Ron spent his free time supporting his children and grandchildren, spending time at the farm, and playing his accordion with his grandchildren.
Survivors include his wife of nearly 58 years, Janice; children, Brian (Connie) Rogers and Rachelle (Chuck) Van Gelder; grandchildren, Kale (Bridget) Manuel, Krista (Eric) Kazyak, Kayla Rogers, Kory Rogers, Nathan Van Gelder, and Kaitlyn Van Gelder; great-granddaughter Olive Joy Manuel to be born in July; sister Marilyn (Sam) Kielty; along with many other family members and friends.
Preceding Ron in death were his parents, Gerald and Genevieve Rogers; parents-in-law, Floyd and Zelda Frame; and brother, Franklin Rogers.
Ron was a devoted husband, father, grand-father and steward of the land.
His enthusiasm, humor, insight and kindness will be missed by everyone.
May he be at peace in God’s loving care. 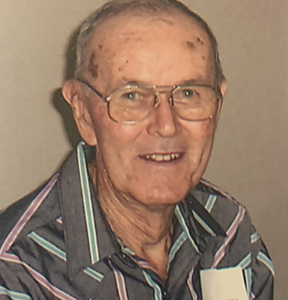