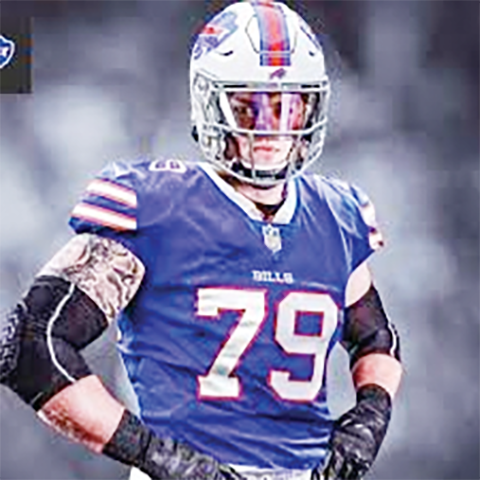 Lenox Tiger and Northern Iowa Alumni Spencer Brown has officially taken snaps in an NFL game. Spencer was drafted this past May by the Buffalo Bill in the third round of the 2021 NFL draft. He is operating as a backup Swing Tackle for the Bills this season.
Swing Tackle essentially means he is the backup at both left and right tackles; Spencer has experience at both positions from preseason and college games.
To put it into perspective last year there were 1,093,234 young men that played in a high school football game last season. Of those 1.09 million only 6.5% or 71,060 are expected to play football in college, and then the drop continues that only 1.2% of all college players will be drafted into the NFL.
The chances of a Lenox High School kid making the pros and actually playing are 0.00075%. Same odds as being struck by lightning… Well folks…. I guess Brown better not go out into the rain!
Congratulations to #79, his family, and friends; the Lenox community is behind you!

Cross Country is Off and Running