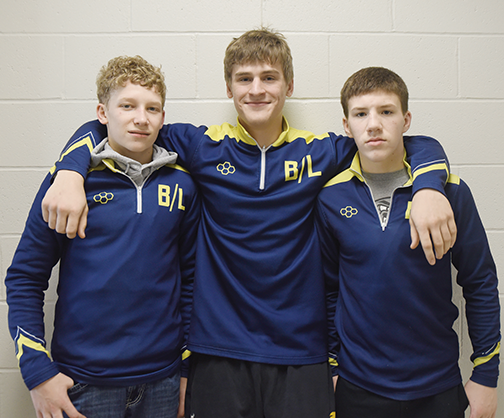 by Jason Bucher
On Saturday six Bedford/Lenox wrestlers traveled to Underwood for the Class 1A District 6 meet with a chance top advance to the state meet in Des Moines at Wells Fargo. Junior Jake Cox (182 lbs), freshmen Chase England (120 lbs) and Dylan Stein (126 lbs) all punched their ticket to state on Saturday. 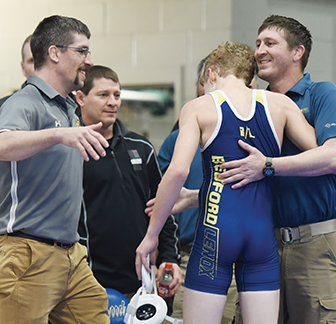 Coaches Jared O’Riley and Derek Weller celebrate Chase England’s win in his last match on Saturday that qualified him for the state tournament. Chase defeated Sloss in the wrestle off after losing to him last week in Sectionals.

Chase England (Photo to the right), wrestling at 120, has his opponent in the pin position and waits for the official to blow the whistle. This was Chase’s second match of the day. Chase took second and punched his ticket to the state tournament.

England wrestled his way back to a second place finish to advance to Wells Fargo. England was pinned in his opening match by Allen of Underwood at the 1:08 mark. He then defeated Fineran of AHST with a fall at 1:35. This set up the wrestle back with Sloss of ACGC who pinned England in the finals last week at sectionals in 39 seconds for the championship. England however seeked revenge and with a trip to state online, he did just that avenging last weeks loss with a pin in the third period at 4:42 for second place finish and a trip to state. England will enter state wrestling with a record of 36-15 and face off against Rinken 51-0 of Nashua-Plainfield in his first bout. 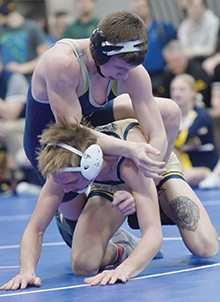 Dylan Stein qualified for the state tournament with a second place finish at Districts on Saturday in Underwood. Stein, wrestling at 126, is shown wrestling in his second match.

Stein (126 lbs) finished the event in second place to advance to Des Moines. In his first match he won an exciting 5-3 sudden victory over Buckholdt of Underwood. Trailing 2-1 heading to the third, Stein used a a point from stalling and a reversal to take a 3-2 lead, before an escape from his opponent sent us to overtime tied 3-3. In overtime Stein wasted no time getting a takedown eighteen seconds in for the exciting victory. He then fell to Rose of Riverside by a 15-0 technical fall in the finals for second place. Stein enters the state bracket with a 34-12 record and will square off with Arjes 41-4 of North Butler-Clarksville in his first match. 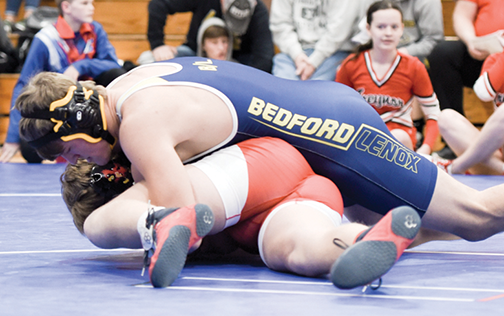 Jake Cox, wrestling at 182, also qualified for the state wrestling tournament after a second place finish at districts. Cox won his first match and lost his second match.

Cox (182 lbs) will make his first appearance at state qualifying with a second place finish at sectionals. Cox had no problem with Young of Treynor, needing only 29 seconds to get his opponent on his back for the pin. Cox was then pinned in the finals by Freeberg of Tri Center at 2:25 for second place. Cox will enter state at 42-7 and grapple with Glendening 45-6 of New London in the first round.