By Tyler Peterson
Monday the 7th the Lady Tigers had their final regular season game of the season at Corner Conference Champion and undefeated Stanton. The Tigers jumped out to a quick lead in the first quarter outsourcing the Viqueens 15-9. Stanton turned the tide in the second quarter, outshooting the Tigers 17-9 for a two point lead heading into the locker room at halftime.
The Tigers and Viqueens battled back-and-forth in the second half with the fourth quarter ending in a 54-54 tie to send the game into overtime. It was the first game of the season that required the extra period for either team. The Tigers tied the game in overtime with just three seconds remaining in the game. Stanton inbounded the ball, pushed it ahead and as time expired Stanton junior Jenna Stephens hit a three point basket from five feet beyond the arch to notch a three point victory over the Tigers in heartbreaking fashion. Final score Stanton 67, and Lenox 64.

The Tigers were fired up on Thursday the 10th as they took on the Murray Mustangs in the first round of the IAHSGAU Regional Tournament and to say they completely dominated would be an understatement. The Tigers jumped out to a 25-1 lead after the first quarter, extended that lead to 38-4 after the end of the second quarter, and cruised to victory in the second half 54-20.

The Tigers now advance to play East Mills (18-4) on February 15 in Malvern in the second round. Tiger Pride! 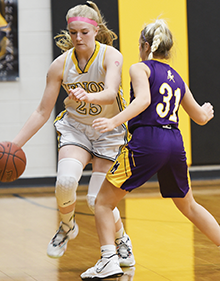 Sadie Cox pushes past Murray defense to bring the ball down court in the first game of regionals on Thursday night. 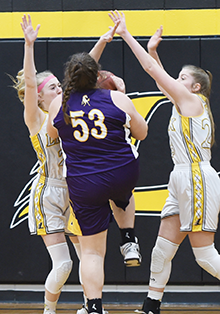 Sadie Cox and Jynessa Cox block Murray from shooting in the Tigers first game of regionals. . 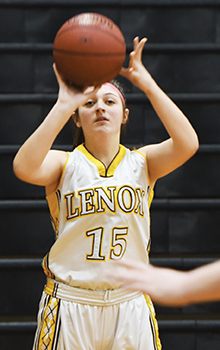 Izzy Curtis shoots from the corner for the Tigers against Murray Thursday night.

Cadence Douglas tries to score for the Tigers despite Murray’s defense in the first game of regionals Thursday. 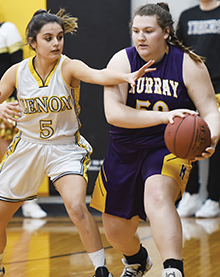 Brooklynn Ecklin steps in to block a Murray pass in the first round of girls’ regional basketball action.