By Tyler Peterson
The Lenox Tiger boys and girls basketball teams each bowed out of postseason play this past week to bring their 2021-2022 seasons to a close.
Monday the 14th the boys traveled to take on the Stanton Vikings in the first round of district play and fell to the home team by nine point 55-46. The Tigers trailed by one at the end of the first quarter and one at the end of the first half before Stanton dropped 22 points to extend the lead in the third quarter that proved to be too much for the Tigers to overcome.
Freshman Gabe Funk led the Tigers with 15 points and eight rebounds. Sophomore Carter Reed had eleven points, junior Keigan Kitzman finished with eight points and nine boards, and junior big-man Owen Junker had three points and a team high nine rebounds.
The Tigers season came to a conclusion with an overall record of 10-12. 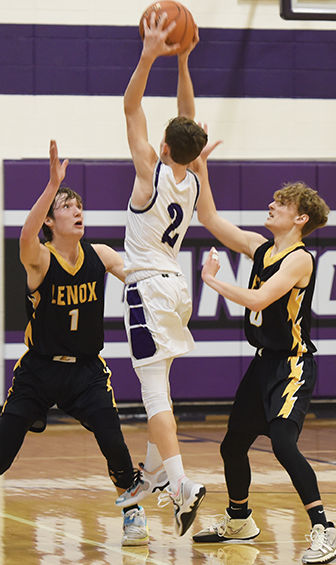 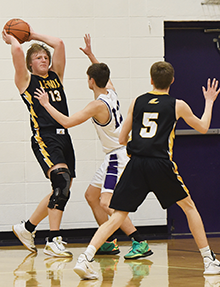 Owen Junker gets ready to pass to Gabe Funk in post season play at Stanton.

Freshmen Gabe Funk jumps high to score for the Tigers. He led in scoring with 15 points. 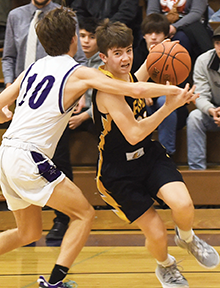 Carter Reed pushes Stanton out of his way to get closer to the basket.

The Lenox ladies traveled to Malvern to take on East Mills. The Wolverines hit six three point baskets in the first half that aided in them taking a 34-19 lead at the end of the first half.
The Tigers made some great changes and played excellent defense in the second half allowing just one made field goal all half, as well as cutting the lead to just four. Unfortunately for the visiting Tigers East Mills hit free throws down the stretch to take down the Tigers by ten, 49-39, to end the 2021-2022 campaign.
Freshman Zoey Reed led the Tigers with 19 points on 9/16 shooting, seven rebounds, and three assists. Fellow freshman Sadie Cox was also in double-figures with twelve points, ten rebounds, and two assists. Senior Jynessa Cox and junior Marcey Bailey each had three points, and junior Kambrie Michel rounded out the Tiger scoring with a basket. Junior Cadence Douglas had eight rebounds, and senior Brooklynn Ecklin had four assists.
Congrats to seniors Brooklynn Ecklin and Jynessa Cox on a great career.
The Tigers finished with an overall record of 16-7. Tiger Pride!