By Jason Bucher
On Thursday three Bedford/Lenox wrestlers made the trip to Des Moines to compete in the Class 1A state wrestling tournament at Wells Fargo. To make it to state is an accomplishment in its own as your are one of sixteen wrestlers in your weight group to qualify. Freshmen Chase England (120 lbs), Dylan Stein (126 lbs) and junior Jake Cox (182 lbs) all qualified and squared off with a state ranked opponent in their opening match.
England started off against the number one ranked Rinken of Nashua-Plainfied and was pinned in the opening period at 1:06. England was then eliminated in his next match when he was pinned by Dusenberry of Wilton in the second period at 2:12. England finishes his freshman season with a 36-17 record.
Stein faced off with the number seven ranked Arjes of North Butler-Clarksville and was pinned in the third period at 4:43. He bounced back and picked up a 12-6 decision over Nutt of Missouri Valley using two three point near falls to pick up the victory and send him to the second day of the tournament. On Friday he dropped his only match to Knaack of Don Bosco when he was pinned in the third period at 4:50. Stein finishes his freshman campaign with a 35-14 record.
Cox squared off with the number five ranked Glendening of New London and fell by pin in the first period at 1:10. Cox was eliminated in his next match when he fell to Clausen of Missour Valley by a pin in the second period at 3:11. Cox finishes his junior season with a record of 42-9.
Congratulations to these three young men on their great seasons and the great achievement of being one of the top sixteen wrestlers in the state in Class 1A. 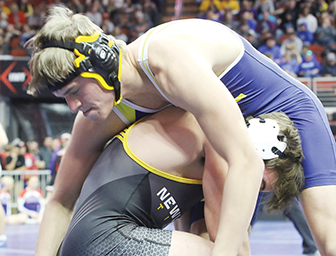 Jake Cox, wrestling at 182, fights to break free of the wrestler from Missouri Valley at the state tournament. (photo courtesy of Iowa Newspaper Assn.)

Jake Cox wrestled against the #5 ranked wrestler from New London in his first match at the state tournament on Thursday. (photo courtesy of Iowa Newspaper Assn.) 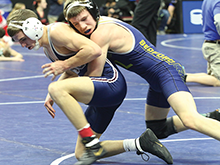 Freshmen Dylan Stein, wrestling at 126, started his first day at the state tournament going up against the seventh ranked wrestler.He lost that match. (photo courtesy of Iowa Newspaper Assn.)

Freshmen Dylan Stein came back to win his second match and advanced to wrestle on Friday.(photo courtesy of Iowa Newspaper Assn.) 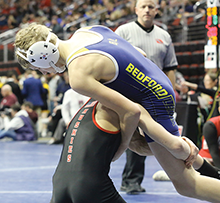 Freshman Chase England drew the #1 wrestler in the 120 pound class for his first match on Thursday at the state tournament and was pinned in the opening period. (photo courtesy of Iowa Newspaper Assn.)