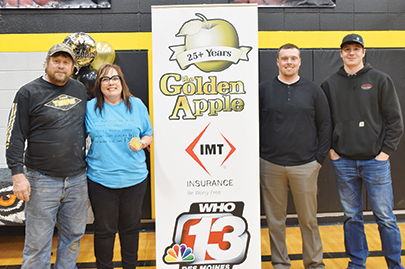 The Lange family celebrating with Diane were husband, Jeff, at left, and sons Caleb and Colby at right.

One very special teacher received one very special award on Monday at Lenox School. Diane Lange received the Golden Apple Award, a special recognition given to teachers for excellence in teaching and leadership. Diane was one of only nine teachers to receive this award in the state of Iowa in 2022 from WHO Channel 13 and IMT Insurance.
An all-school assembly was held in the gym with many members of the community also in attendance. Lenox band played as everyone filed into the gym. Only a few people in attendance knew who was going to get the award. Jodi Long, Channel 13, gave a big shout out to the band before introducing Kelly Field from IMT Insurance.
Kelly Field, IMT Insurance, said the Golden Apple Award has been recognizing excellence in teachers for over 25 years. Nominations come from students and their families. She gave several clues about Diane before announcing the award.
Diane is known for creative learning lessons and fun classroom environment. She has an uncanny ability to connect and engage. Students feel comfortable being open and authentic and their self-confidence grows throughout the year. She is described as a true example of what a teacher is and what a teacher should be. Throughout her time at Lenox School, parents, colleagues, and students have all enjoyed stories shared, and energy, silliness and enthusiasm. She has been described as a second mother and mama bear to many of her students. One student shared they thought she had super powers because she could tell what everyone was doing without even looking.
Diane teaches kindergarten and will be retiring at the end of the school year.
Congratulations Diane on a well deserved honor. 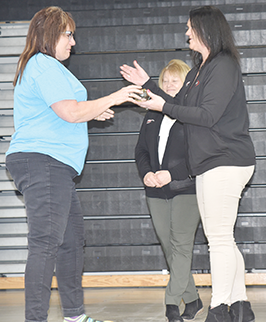 Shella Baldwin and Tanya Strong, Farm and Home Insurance, present Diane Lange with the Golden Apple Award on behalf of IMT Insurance and WHO Channel 13. 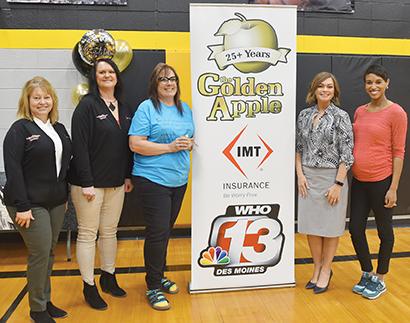 Lenox Walking Trail gets boost in funding with $100,000 Wellmark grant