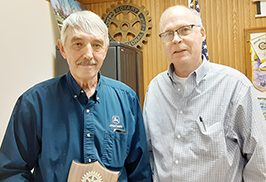 Randall was recently awarded the 2022 Rural Urban Good Citizen Award sponsored by Lenox Rotary.  Randall was raised on a row crop and livestock farm East of Stringtown.  He attended country school through the fifth grade and finished in Lenox, graduating in 1967.  He farmed his grandmothers ground near Clearfield to help finance his degree from Iowa State, majoring in farm operations and ag mechanization.  After college, he joined the National Guard and served for six years.  In 1972, he began working at Barker Implement as a technician and in 1977, he became service manager for 43 years.  In 1973 he married Pam Beadel and together they raised Rob and Erin on the family farm.  In 1981, he began renting the Beadel home place and eventually bought it in 1990.  Even after retiring from Agrivision in 2015, he still receives the occasional call for advice from his former technicians!  Presently, in addition to his own farm, he rents adjacent ground and helps Rob with his operation.  Randall practices no till on all of the acres.  As a Rotarian, Randall, at the request of Kevin Barker, designed and built the tractor that has become a popular ice cream maker for the rodeo and other events near and far.  In the off season, he enjoys restoring vintage tractors and anything with a motor.  Randall is very involved with the Methodist Church here in Lenox.  He is the chairman of The Board of Trustees and applies his carpentry skills to many church projects.

Lenox Walking Trail gets boost in funding with $100,000 Wellmark grant

Diane Lange is recipient of IMT, WHO-13 Golden Apple Award