By Tyler Peterson
The Lenox Tiger football team’s season came to a close this past Wednesday at the UNI Dome in Cedar Falls
The Lenox Tiger football team’s season came to a close this past Wednesday at the UNI Dome in Cedar Falls. The number four seeded Tigers had a tall task against the state’s number one rated and top seeded team in Remsen St. Mary’s. The Tigers lived up to every expectation going into the game, and did not disappoint putting together a great game plan and playing tough from whistle to whistle. Unfortunately, the Hawks of Remsen made two key stops on defense, and capitalized on a few big plays to hand the Tigers their first and only loss of the season.
Remsen came out and scored on their first play from scrimmage and converted the two-point conversion to make the score 8-0 Hawks. The Tigers were not intimidated, and proved it by scoring on their first play from scrimmage on a 65 yard touchdown pass from sophomore quarterback Gabe Funk to senior captain Isaac Grundman. The conversion failed and made the score 8-6. On Remsen St. Mary’s ensuing possession, senior captain Caedan David laid a huge hit on a Hawk receiver to jar the ball loose. Isaac Grundman scooped up the fumble and returned it to the 10 yard line. Lenox wasn’t able to punch it in for any points, but definitely proved they belonged in the Dome against the state’s top rated team. Remsen scored one more touchdown in the first quarter on another long touchdown pass to make the score 15-6 at the end of the first quarter.
Remsen St. Mary’s scored two touchdowns in the second quarter, and the Tigers had one score on a long rush from Gabe Funk. Funk broke free on a designed QB run behind his seven senior blockers: Isaac Grundman, captain Keigan Kitzman, Jake Cox, Caedan David, Xavier Adamson, Owen Junker, and captain Trayce Miller to make the score 14-30 at half with the Tigers trailing.
Lenox received the second half kick-off and quickly put a drive together to score on yet another huge rush from Funk. Gabe reversed field, made a man miss, and got two key blocks from Jake Cox and Trayce Miller to scamper for a 61 yard touchdown to make the score 20-30. The Tiger offense made it back inside the ten yard line twice in the second half, but ultimately were unable to cap off drives with scores. Remsen St. Mary’s found the endzone late in the game twice to win 42-20. The Tigers played extremely physical all game as it was overly common to see a Hawk player down at the conclusion of the play. Although they didn’t come away with the win, Coach Nardini and Coach Bonde’s team never wavered and showed they belonged in the Dome.
A special shout out to an amazing senior class: Isaac Grundman, Keigan Kitzman, Samson Adams, Caedan David, Jake Cox, Xavier Adamson, Owen Junker, Trayce Miller, Leo Wardlow, and Oscar Quintanilla on cementing your legacy on Lenox football. Tiger Pride! 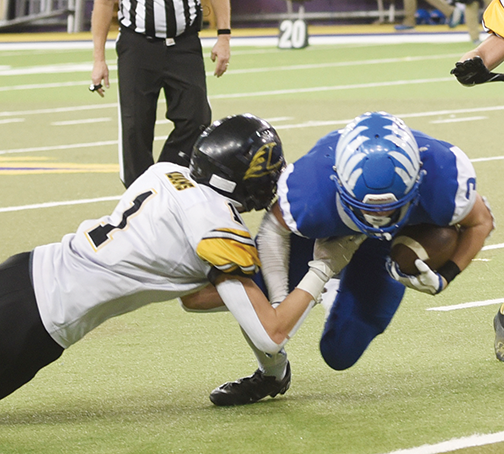 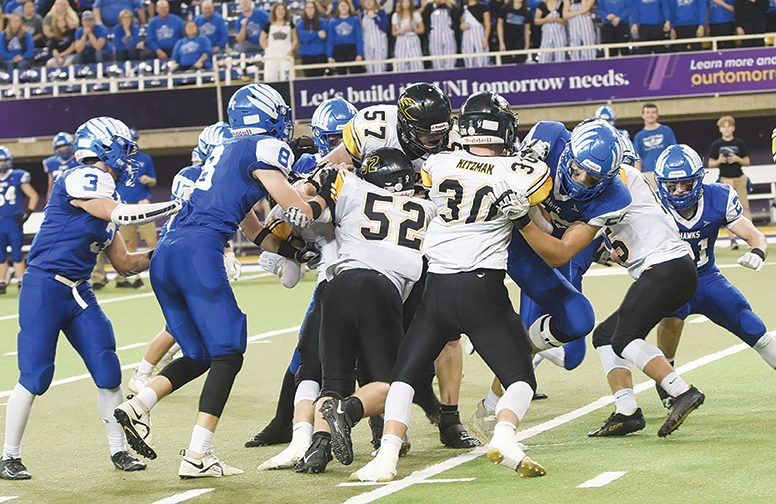 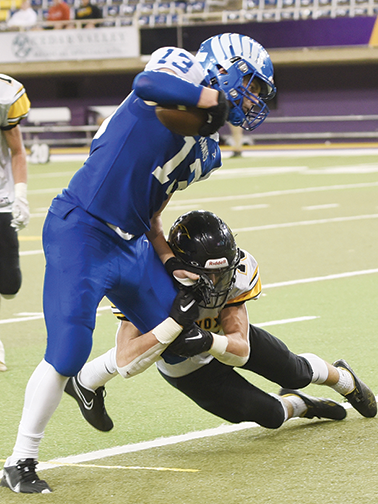 Caeden David grabs the leg of a St. Mary’s Remsen ball carry for one of his three solo tackles in the state semi-final game.(photo by Colleen Larimer) 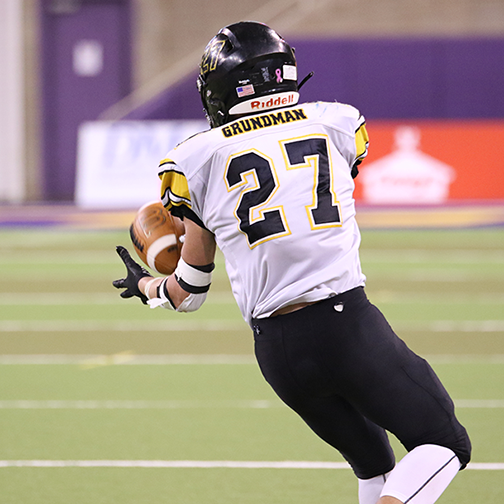 Isaac Grundman with the catch in the final minute of the Tigers’ semifinal game against Remsen St. Mary’s. (photo by Meg Baker) 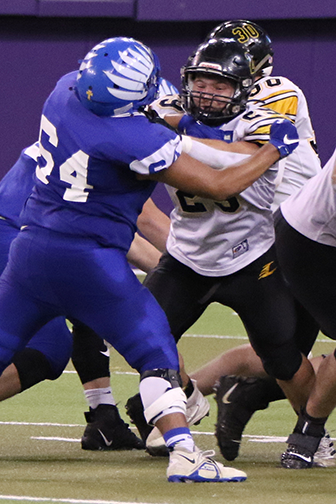 Senior center Xavier Adamson with the block in the 2nd quarter of last Wednesday’s semifinal game between Lenox and Remsen St. Mary’s. (photo by Meg Baker) 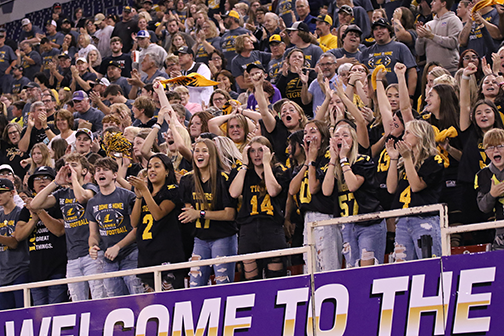