Chelsey Hoakison was awarded the distinguished American FFA Degree at the National FFA Convention in Indianapolis, In. on October 29. This degree is the highest honor in the FFA organization and less than 1% of FFA members receive it. It shows an FFA member’s dedication to his or her chapter and state FFA association. It demonstrates the effort FFA members apply toward their supervised agricultural experience and the outstanding leadership abilities and community involvement they exhibited through their FFA career.
Chelsey graduated from Lenox in 2021 and is in her sophomore year at Iowa State University, majoring in Agricultural Business. She is the daughter of Jamie and Vince Brown and Curtis and Tiffany Hoakison.
Chelsey was active in FFA through all four years of high school at Lenox and continues to be a member of the Lenox chapter. Students can be members of their local FFA chapters for four years after graduating or until they turn 21. FFA teachers were Kristi Spindler, Jackie Rush, Riley Brown, and Casey Allen. She served as treasurer, vice president, and president during high school.
“Definitely doing that was a good thing for me,” said Chelsey.
She also competed in different activities at the district and state levels. Her favorite was the Green Hand competition at the state level. She was tested on her knowledge of FFA, similar to a Quiz Bowl, but in an exam setting. “I actually placed in the top 10 in the state along with Tyra Stoaks that year,” said Chelsey. “That was pretty cool.”
She completed more than 50 hours of community service working at Fareway and at the flower shop in Lenox during high school and while attending ISU.
Lenox FFA teacher Casey Allen said, “It really is an honor. It’s a tough thing to get. It requires so many years of back records. You have to show you have earned enough money or worked enough unpaid hours. It truly is an award and honor. Not everyone has what it takes to get one.”
A formal ceremony was held during the convention to award the degrees with 158 from Iowa receiving the honor. There were 80,000 FFA members registered for the national convention. Each recipient’s name was read and they walked across the stage to receive their certificate. 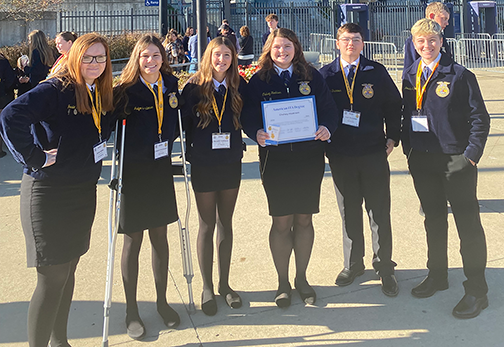 Deb and Jeff Hansen Foundation Hits the Road to Fight Hunger for 21,150 Children in 117 Schools