By Tyler Peterson
The Lenox Tiger basketball teams were back in action twice this past week against non-conference opponent Griswold at home on Thursday the 5th, and on the road at Pride of Iowa foe Nodaway Valley on Friday the 6th.
Thursday it was all Tigers in both the girls and boys contests. The Lenox girls scored 23 points in the first quarter and never looked back taking down the ‘blue’ Tigers from Griswold 63-26 to start 2023 with a big ‘W.’ As a team the Tigers shot 40% from the floor, 40% from beyond the arch, 50% from the free-throw line, and committed just ten total turnovers.

Friday night the Lenox Tigers girls and boys basketball teams were back in action this time the Tigers were on the road at Pride of Iowa Conference Nodaway Valley.
The favorite to win the POI on the ladies side, Nodaway Valley, lived up to the hype taking down our visiting Tigers 79-41. 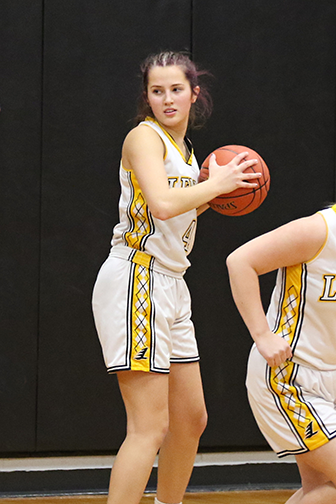 Cadence Douglas with one of her 8 rebounds in the Tigers’ win over Griswold. (photo by Meg Barker) 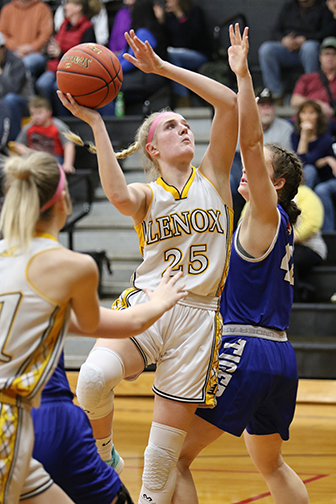 Sadie Cox works for her shot in the 2nd half of the Tigers’ win over Griswold Thursday night.  Cox finished with a double-double, scoring 19 points and grabbing 11 rebounds. (photo by Meg Barker)

By Tyler Peterson
It was much the same in the boys game against Griswold last Thursday evening. Lenox took an early 16-8 lead in the first quarter, extended that lead to 40-8 at halftime with a great offensive and defensive effort, outscored Griswold 23-5 again in the third quarter, and closed things out in the fourth to win 68-16. As a team the boys were 28/48 from two, 8/18 from three, outrebounded Griswold by double-digits, had 15 steals, and committed just eleven total turnovers.

The Lenox boys had their best offensive game of the season, and as far back as I can remember, Friday night against the Wolverines. The Tigers dropped 91 points to defeat Nodaway Valley 91-85. Lenox had four in double-figures, and senior Keaton England led the way for the Tigers with a double-double dropping a season high 23 points, dishing out ten assists, and grabbing seven boards.

Carter Reed hits a three in the 2nd quarter of Thursday night’s win against Griswold. (photo by Meg Barker)

Walon Cook drives in for the layup in the first quarter of the Tigers’ win over Griswold Thursday night.  Cook finished the game with 7 points. (photo by Meg Barker) 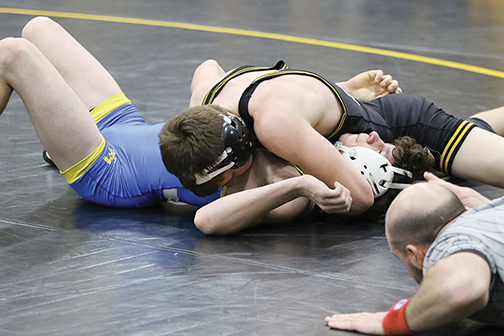 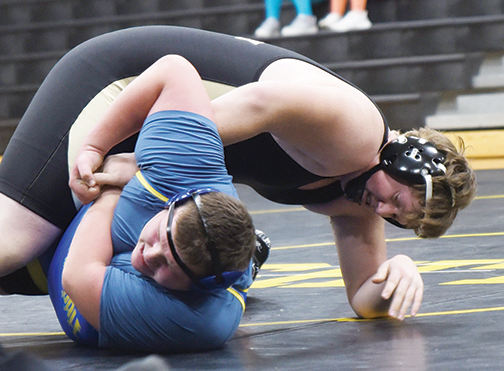 At 285, Jace Smith won a 5-0 decision over MSM in the Lenox dual on Tuesday night. (photo by Colleen Larimer) 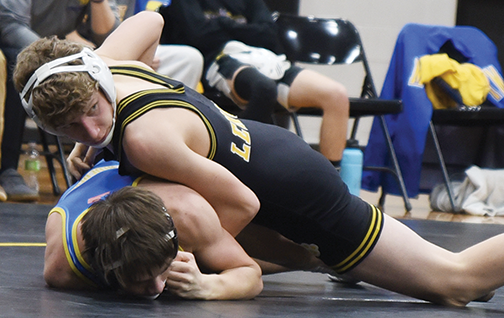 Chase England looks to the coach for advice in his match on Tuesday night against Martensdale-St. Mary. Chase won by fall in 1:41. (photo by Colleen Larimer)

Lenox fourth and fifth graders had the court for a few minutes on Thursday night and showed what they are learning in basketball practices.